Yesterday I was lucky enough to visit Philip Hobbs’ incredible Sandhill stables based down in Minehead. Philip started in 1985 with just 6 horses, he now has 110 in training. With these 110 horses, Philip’s goal per year is to have 100 winners and £1 million in prize money.

When we arrived we met Philip who introduced us to his assistant trainer Johnson White. Johnson would be showing us around all day as Philip himself had a very important day at Ascot with Defi Du Seuil. But before Philip left he met us, took photos and spoke to us about Defi and what chance he thought he had, he also arranged for us to be guests of his yard at Taunton races, which was lovely of him. Thank you to Mr Hobbs and his team for being so lovely with us.

So before I get into the day , I want to say a massive thank you to Johnson who was very knowledgeable, answered all of our questions and was just a lovely person all around. Johnson started by showing us around the ins and outs of the yard, including his office, his head girls’ office. The stable have multiple lists around the offices including, what the horses have done on that day, if the horse has a cough or a cut or anything wrong with them, so they can always go back and look at the lists if there is ever an issue.

We were then shown one of the most important rooms, the silks room. Each owner of course has their own colours so it is a super important job to ensure the right colours go with the right horses. Yesterday Philip had multiple horses going to multiple places, so it was important to make sure everything was in line and correct.

Then we were taken around to the walkers, where we met the lovely Thyme Hill who was warming up. Johnson told us, they all love Thyme Hill and he is definitely a horse to watch out for. The horses normally do 30 minutes on a walker to warm up, do their work and then 30 minutes to cool down after being washed off.

Johnson also showed us the weighing scales, where each horse is weighed before they leave the yard for a race and then when they return. He said on average a horse will lose around 10kg, however a horse travelling a fair distance, like Haydock yesterday would lose around 15kg. But within 24-48 hours they are normally back to their starting weight. 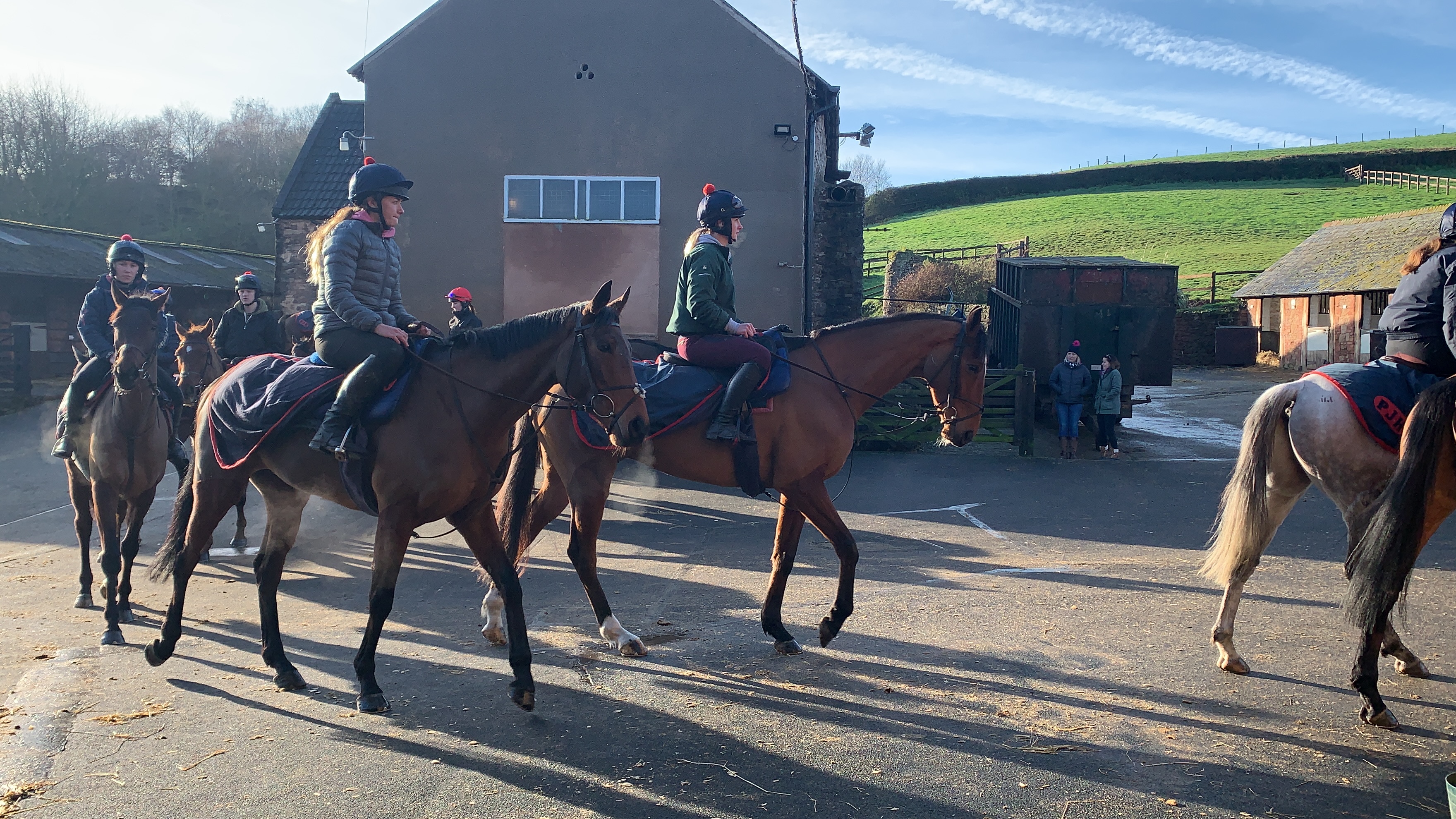 Johnson then took us to meet the lovely Rock The Kasbah before he set off to Taunton for his race, in which he ended up coming second. Rock The Kasbah has always been a horse I have adored so it was a total dream to finally meet him and wish him luck for his big race. He is a super loving horse, so calm and cool and collected. Johnson did say that he would not like the heavy ground at all, but they were running him as they had no other options for him and if he didn’t run now it would be another 6-8 weeks before he ran at all. So hearnig that, it was very nice to see him come second even though he hates the heavy ground. 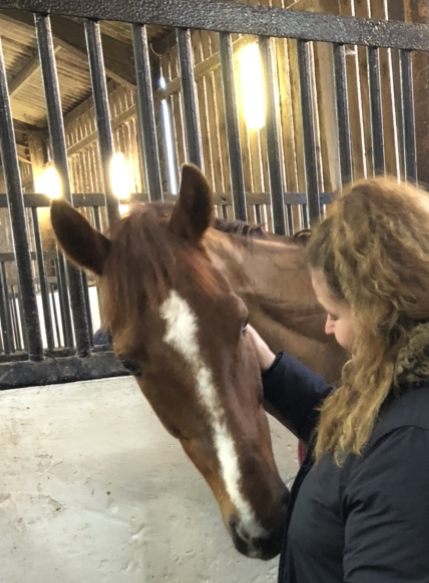 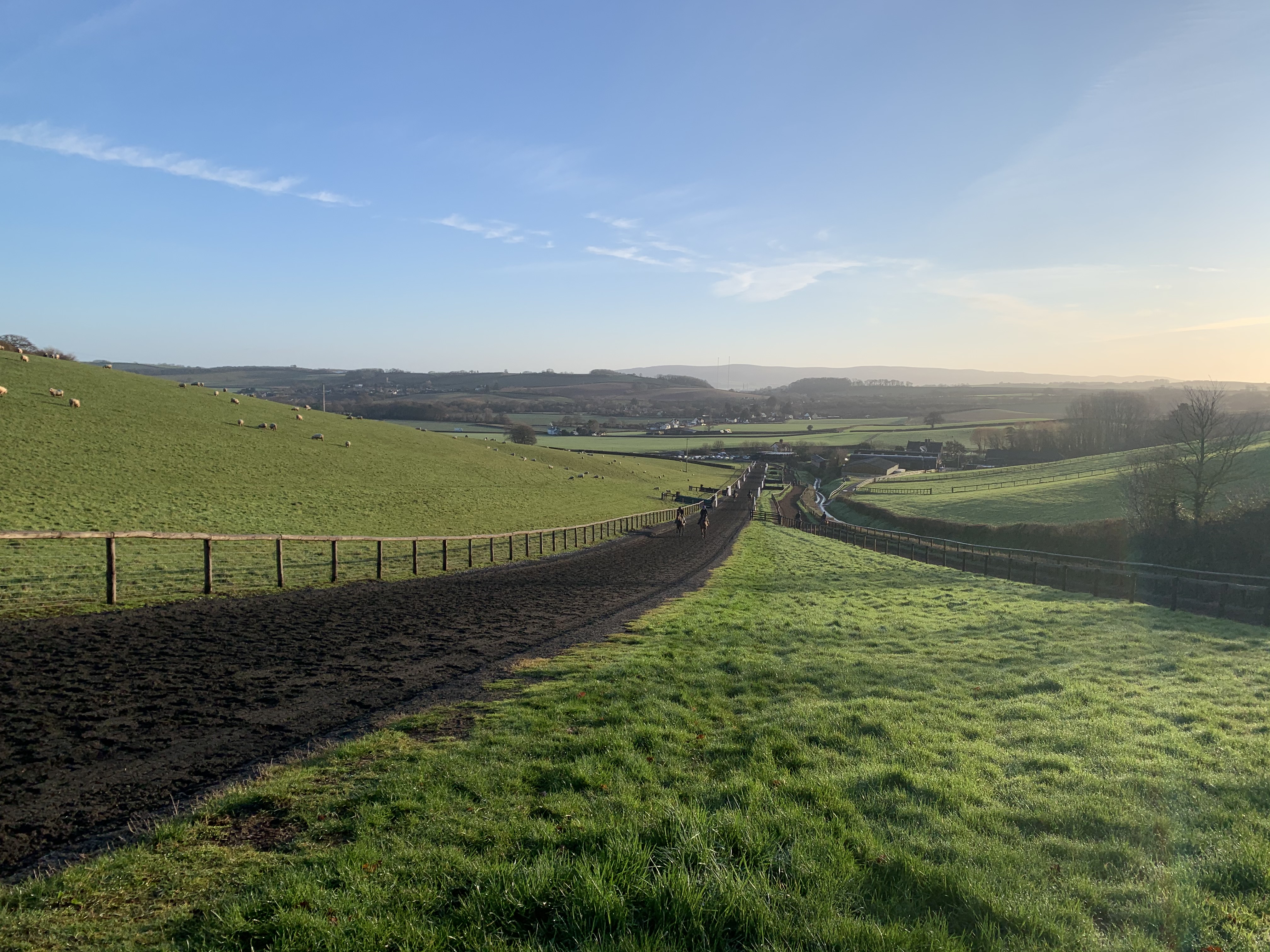 We got to see some very talented horses, including some younger horses yet to run and some incredible horses we all know and have probably bet on before.

We walked up the hill to the top of the gallop and we were all breathing heavily and feeling it in our legs. So that showed us how much work these horses do put in every day to reach top fitness.

Johnson then took us down to their outdoor 12 foot pool. He said currently they only have one horse that swims, but if they feel swimming will help a horse without too much pressure on their legs and back then that’s the route they go down. Their pool is a gravity fed pool from their pond and then they add chlorine to make sure it is safe for the animals. He said normally a horse would do 6 laps around the pool and then come out and go onto a walker to dry before going back to their stable.

We were then welcomed into Philip’s house where we had some lovely breakfast and a cuppa where the team answered some of the questions we had.

Johnson told us he had worked for Philip for 25 years and that the whole team love working for him. He also told us Richard Johnson, Philip’s stable jockey and Champion jockey, visits the yard at least once every 2 weeks to ride out for him. However he did say that the majority of the staff Philip has are jockeys/amateurs/conditionals so they don’t need Richard there every single day as they have the capacity to ride the horses out and school them. But having Richard there is obviously an added bonus as he is probably (almost definitely) the person who will be riding these horses on the track. So it’s good to have him school the horses and get a good feel for them.

We were then allowed to walk around the yard and meet some of their stable stars, including Thyme Hill, Reikers Island, Horse Force One (one of the most loving horses I have ever met), Brother Tedd and JP’s Jerrysback.

Both Philip and Johnson both said Defi is in top form going into yesterday’s race and they fully expected him to win. They wouldn’t give too much away about which route at Cheltenham they would go down and said they would leave it until the ‘last possible moment’ to make any decisions in regard to Defi and Thyme Hill’s futures. He said they regularly make a plan of action for horses but they leave it down to the last possible second to decide what they actually want to do.

Overall we had an amazing day at the yard, the whole team were lovely and very knowledgeable. They were understaffed due to having so many runners in different places so their staff were out with their horses. But they all mucked in to make sure all of the work was done and the horses were all looked after. Again, another visit where the horses welfare is at the forefront of everything they do. You can just see how much the stable staff adore the horses and how well looked after they truly are.

I want to say a massive thank you to Philip, Johnson and the whole team for their incredible hospitality and being so lovely, even on such a busy and hectic day!

We were then lucky enough to pop down to Taunton whilst down there and be guests of Philip’s at their Portman Cup Day, which was an honour. So again, thank you to Philip for personally sorting that for us. It was truly an incredible end to an incredible day with his team.

I find it super interesting when visiting different yards, that each trainer does the same thing with the same goal, but they all do it slightly different. Again, yesterday was the same concept but slightly different in how Philip does it. It’s amazing to have that insight into how such a successful trainer operates. He has been in the top 6 trainers for over 2 decades, which is an achievement in itself, so it truly was an honour spending the morning with his team and I am grateful to Philip for allowing me the opportunity.

Thank you for reading, I hope you have enjoyed reading and I will see you all again soon, in my next post!